Written by Giovanni Gomez
Updated over a week ago

Using the Project Planner is a quick and efficient way to begin building out new projects in Monograph. Whether using the Budget Calculator to start with a budget or building piece by piece to start with a phase - this tool is designed to help you build the foundation of your projects and unlock the use of other features within Monograph.

✋ For new users, start with How to Create a Project guide first, if this isn't your first project proceed ahead.

Use the "Locks" in the Project Planner to "lock-in" confirmed fees and budgets.

Project level locks are found within the Budget Calculator - one is next to Total Fee, and the other next to Project Budget. These locks are focused on your overall budget: 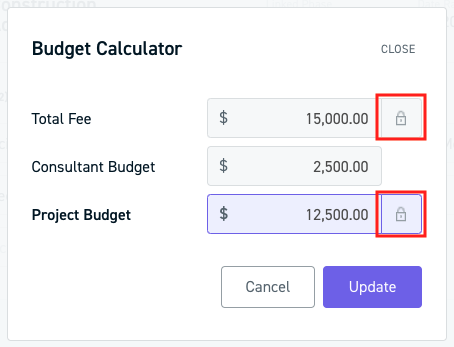 Phase level locks are found within the specific phase of the project, next to the Phase Budget.

🧠 Best Practice: Always lock your budgets after you've confirmed the numbers are right! You can always unlock it to make adjustments later. More on Locks.

Add phases and a phase budget to map your project.

Phases are a critical component to a project and ensuring that you allocate an overall Project Budget and individual phase budgets will allow Resource, Team Forecast, and Reports to work accurately.

Adding a phase budget may be done by (1) adding in a specific dollar amount (in red below) OR (2) allocating a percent of the overall Project Budget (in blue below).

🧠 Best Practice: Never leave a project without phases and a phase budget. Without this information, this project will not appear in your Resource or Reports.

After adding phases with a phase budget, specify which team members will be working on this project and their role and hours.

For example, we need to know that Charles is working on SD phase, as a Project Manager at a billable rate of $150/hr to ensure that any future time logged toward this phase will be tracked and impact the Money Gantt and phase budget.

🧠 Best Practice: Assign roles and use the Audit Timesheets feature often to catch any team members who may have no assigned role in a project!

Note: When an individual has a Default Role and logs time to a phase they aren't assigned to, Monograph will automatically add them to the Project Planner with their role and rate. This ensures that everyone's time is being billed correctly and that nobody is left without an assigned role!

Assign hours to all team members for each phase they are in.

This is because if we don't know how many hours we expect Charles to work on a project, we won't know when Charles is working too much or too little. It also allows admins to review projects at completion to understand how their planned estimates compared to hours worked to improve future proposals and profit margins.

Assigning hours to each team member may be done by either adding in a specific number of hours (shown in red) or by allocating a percent of the time (shown in blue).

Common Question: "But what if I don't know how many hours they will work on a project?!" Everyone starts somewhere, so pick a method below:

🧠 Best Practice: Never leave hours unassigned, use your best professional estimate to assign a ballpark and then adjust as learn.

Did this answer your question?